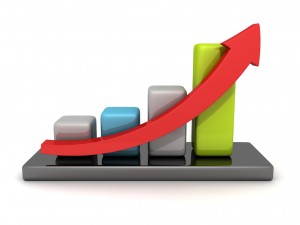 The valuation of technology stocks looks somewhat excessive, but there are still growth stocks that offer great valuations and longer-term price appreciation. In the mid-cap technology space, a stock with an excellent risk-to-reward trade is Vishay Intertechnology Inc. (NYSE:VSH). It’s deserving of a closer look.

Vishay Intertechnology is an emerging technology growth stock that could be in the midst of a long-term revenue and earnings upswing.

Vishay Intertechnology stock traded at a 52-week high of $17.00 in January, but has been comatose ever since, down 1.4% this year, but up 34% over the past year.

Capping the upside for VSH stock has been its failure to deliver consistent and strong revenues and earnings growth.

The revenue picture has been disappointing for Vishay Intertechnology, but things are looking up. Revenues edged up a mere one percent to $2.02 billion in 2016 after a decline in 2015.

The same inconsistency is found on the earnings side, with a massive generally accepted accounting principles (GAAP) loss of $108.51 million in 2015, followed by a strong return to profitability of $48.8 million in 2016. Vishay Intertechnology is expected to continue to ramp up profits to $1.04 and $1.16 per diluted share in 2017 and 2018. (Source: Ibid.)

As far as the quarterly results go, inconsistency has been a drag on VSH stock. The company beat in eight of 16 quarters, dating back to 2013, and has beaten in three of the last four quarters.

The sell side appears to have taken notice, reflected by two higher earnings per share (EPS) revisions for both 2017 and 2018 over the past 30 days. In my view, higher earnings revisions are a bullish signal that suggest higher share prices down the road.

My Bull Case for VSH Stock

A look at the weekly chart of VSH stock displays the nice rally from the double bottom in January 2016, when Vishay Intertechnology was trading at $10.00. A bullish golden cross pattern emerged around the $12.50 level on December 2016, as VSH stock exploded up 35% to its January high. 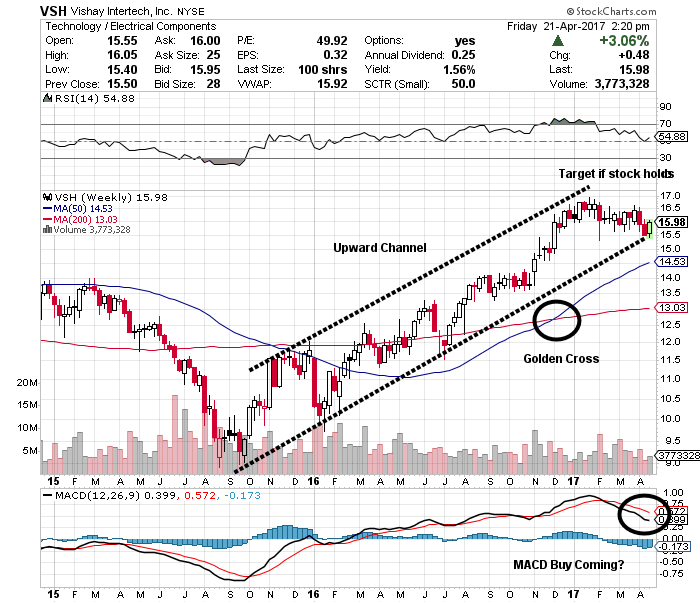 The daily stock chart shows VSH stock drifting sideways along its 50-day moving average (MA) in a somewhat narrow channel, with firm support at $15.25 and resistance at $17.00. 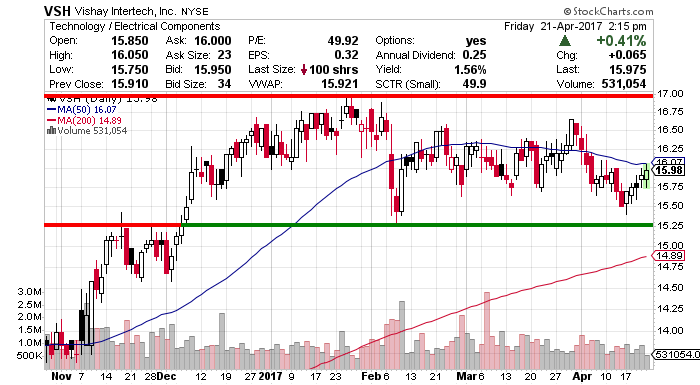 Yet, Vishay Intertechnology stock could be setting up for another attempt at $17.00, as the moving average convergence/divergence (MACD) may be set to flash a “buy” signal.

But, while the technical picture doesn’t easily indicate a price target, the valuation of VSH stock trading at 13.75 times its 2018 EPS and a cheap price/earnings to growth (PEG) ratio of 0.88 suggest that a much higher share price is on the horizon as long as the growth metrics pan out.

Consider if Vishay Intertechnology stock were to double to $32.00. At this price, the multiple would still be at around 27.5 times, only slightly above the 22 times for the S&P 500. The PEG ratio would double to 1.76, which would still not be that out of line.

Now, I’m not saying Vishay Intertechnology can double, but the potential for higher gains down the road are realistic.